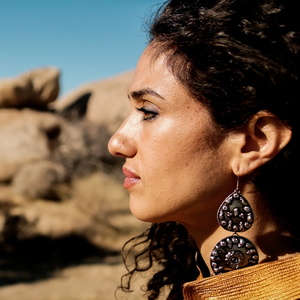 Naima Shalhoub is a Lebanese Arab American vocalist, composer, performing artist, and educator based in the Bay Area. Blending acoustic, Southwest Asian & North African (SWANA) folk, soul, and blues elements with lyrics in Arabic and English, her multidimensional work explores the borderlands of belonging, remembrance, freedom, and the expansive quality ...

of the voice - its power for healing and social justice. Her first full-length studio album, Siphr, will be released on August 6th, 2020.

Her debut album, Live in San Francisco County Jail, was recorded alongside an audience of women with whom she had been facilitating weekly “Music and Freedom” sessions (many of whom participated in the performance). The recording embodies Naima’s deeply-held belief in music as a vessel for freedom and healing, holding the potential to energize movements working toward more just and loving futures.

In addition to performing regularly from nationally-acclaimed venues to grassroots community event spaces, Naima is a seasoned Restorative Justice practitioner expanding from schools into community as the Restorative Women and Girls Coordinator for Restorative Justice for Oakland Youth. She also performs for theater productions, fundraisers, and presents at conferences across the United States, such as the National Campaign to End the Israeli Occupation, and TEDxLAU in Beirut.

With her debut studio album, Naima Shalhoub's "Siphr" journeys through the borderlands of collective healing and remembrance to find grace in the midst of turbulent times

Lebanese-American vocalist, composer, performing artist, and educator Naima Shalhoub understands that zero, or siphr in Arabic, can be revolutionary. For Naima, zero is a circle that holds us all, that encompasses beginnings and endings, nothing and everything. From that realization sprang Naima’s debut studio album, Siphr (to be released August 6th, 2020). With a wide variety of musical influences, Naima crafts nine tracks exploring her Arab American...

Lebanese-American vocalist, composer, performing artist, and educator Naima Shalhoub understands that zero, or siphr in Arabic, can be revolutionary. For Naima, zero is a circle that holds us all, that encompasses beginnings and endings, nothing and everything. From that realization sprang Naima’s debut studio album, Siphr (to be released August 6th, 2020). With a wide variety of musical influences, Naima crafts nine tracks exploring her Arab American heritage, the continuities and internal/external borderlands of life: freedom and captivity, joy and sorrow, shame and power, political and spiritual, and others.

As the daughter of refugees from Rahbé, Lebanon, Naima spent time in Beirut, a place where soulful creativity has grown from immense trauma. She kept coming back to zero, that revolutionary concept from Arabic mathematics which symbolizes newness, completion, and infinity. These eternal notions also correlate with Naima’s spiritual faith and birth name, Grace. Naima elaborates, “I love that we can’t touch the concept of zero. It can’t be tamed, tethered, or trapped. It’s the everything place that is often categorized as nothing. But to me, it is not empty. It is grace in the midst of pain. Bigger than anything that I can comprehend.”

When she discussed the symbolizm of “zero” and its creative inspiration with friend Tarik Kazaleh, the Palestinian-American musician and MC known as Excentrik, he became an enthusiastic collaborator, ultimately contributing as a multi-instrumentalist and composer. As a result, the album Siphr honors the value of wholeness, with nine tracks serving as interconnected parts. Each track is named after a number, with subtitles acting as tributaries, guiding listeners through different experiences on a collective journey.

For the single “Two (Rivers in the Desert)”, set for release on May 12th, Naima creates an aural river within our world’s current cultural wilderness. With lyrics drawn from the biblical book of Isaiah, Naima envisioned this track in Arabic, so she collaborated with her native-speaking parents, aunts, and uncles to fine-tune her word choice and intonation. Filmed by Excentrik in Joshua Tree, the track’s music video features Naima and a mysterious figure exploring the expansiveness of the desert, the redemptive nature of water and Spirit, and encouraging the audience to consider the rivers we can dream into the desert.

Titled after the number of transcendence, “Three (Loved)” offers comfort to a child who experiences sorrow and complicated emotional responses, such as hopelessness and betrayal. Delivered like a lullaby with soothing instrumentals, Naima acknowledges the child’s pain, the reality of creation and destruction, and how love is the most healing and triumphant force we have: “Buildings will stand, and then they’ll fall, but how have we loved at the end of it all?”

Serving as a reflection on human struggle, “Four (Roumieh Prison Blues)”, features lyrics written by men incarcerated at the infamous Roumieh Prison in Lebanon. After visiting the prison with drama therapist and performing artist Zeina Daccache, Naima built the melody around the mens’ lyrics, channeling the Blues. Naima encourages listeners to remember those that are confined around the world, especially during this vulnerable time.

Fusing hip-hop and Arabic styles, “Eight (Arab-Amerikkki)” confronts the United States’ deeply-rooted white supremacy, affirming a refusal to respond to injustice with complacency. Accompanied with rapping by Excentrik, who has toured with hip-hop group The Arab Summit, Naima reflects: “He stayed up all night producing this beat, I wrote the lyrics in the morning, and we recorded it in the studio that day.”

While each song serves as its own circle around Siphr, Naima also implemented distinct sections within certain songs. “Five (The Calling)” considers how we manage self-doubt and conflicting instincts, starting as an R&B track and transforming into an orchestral meditation. Naima sings: “there will be a voice behind you saying ‘this is the way’...calling your name, calling your name.” On “Six (Distraction Suite)”, Naima created three distinct musical segments. Contemplating how we deal with distraction, the track starts with intense free jazz, like the thoughts that can send us spinning. The second part is a 12-bar soulful blues section, returning to the calling voice. In the third part, bass-heavy intensity resumes.

Concluding the album is “Nine (The Return)”, serving as the mirror track and triumphant return to “One (Remembrance)”. Naima explains, “We all deserve to be seen and heard. There is healing in remembrance. The right to return is very significant for Palestinians, as it is for so many indigenous people. Nine is not a final place - the return isn’t a one-time event. I wanted nine to end where one began.”

Siphr was recorded and engineered at the Women’s Audio Mission in San Francisco, where Naima’s residency gave her the opportunity to write the album and record it with Excentrik, cellist Ed Baskerville, and bassist Marcus Shelby. A grant from Restoration Village Arts, designed for artist activists, contributed to the feeling that her community was behind this project.

With live gatherings on hold, Naima continues to share her gifts through alternative means, from leading weekly restorative justice circles on Zoom or singing “Two (Rivers in the Desert)” to open a video conference gathering of indigenous water protectors organized by Policy Link. Reflecting on the COVID-19 pandemic, Naima contextualizes Siphr: “I want to share my truth, so you might hear yours. I wanted to capture the timeless sounds and ancient vibrations of my ancestry while we try to find our way, dreaming new dreams.”

Naima Shalhoub is a Lebanese Arab American vocalist, composer, performing artist, and educator based in the Bay Area. Her first studio album, Siphr, follows her debut release Live in San Francisco County Jail. Naima is also a seasoned Restorative Justice practitioner who works in schools, juvenile halls, and in community holding weekly healing circles with women and girls of color. She also performs for theater productions, fundraisers, and presents at conferences across the United States, such as the National Campaign to End the Israeli Occupation, and TEDxLAU in Beirut.